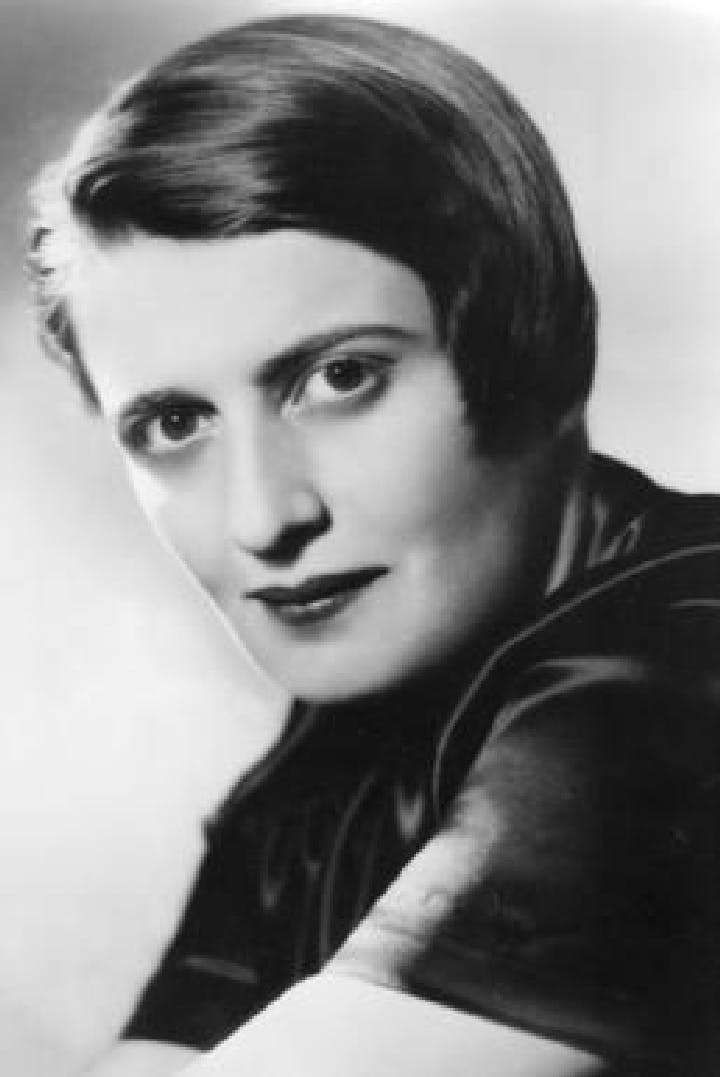 Ready for Her Close-Up

Ayn Rand's work has been critically dismissed as juvenile and subliterate when it has been considered at all, but this has obscured the fact that she helped create an ideological framework that continues to energize debate in contemporary America.

Has any major postwar American author taken as much critical abuse as Ayn Rand? Her best-known novels, The Fountainhead and Atlas Shrugged, have sold more than 12 million copies in the United States alone and were ranked first and second in a 1998 Modern Library reader survey of the “greatest books” of the 20th century. Yet over the years, Rand’s writing has been routinely dismissed as juvenile and subliterate when it has been considered at all. During the height of the Cold War, she managed to alienate leftists by insisting that capitalism was not simply more productive but more moral than socialism or a mixed economy because it allowed the individual to express himself most fully. And she angered the anticommunist Right with her thoroughgoing materialism, lack of respect for tradition, and atheism. (She once told William F. Buckley he was “too intelligent” to believe in God.)

The publication of Anne C. Heller’s Ayn Rand and the World She Made and Jennifer Burns’s Goddess of the Market indicates that a belated but timely reconsideration of Rand’s place in American cases for Rand’s importance to the past 80 years of American intellectual and cultural life all the more convincing. That Rand’s life story is in many ways more melodramatic, unbelievable, and conflicted than one of her own plots certainly helps to keep the reader’s attention. As Burns puts it, “The clash between her romantic and rational sides makes [her life] not a tale of triumph, but a tragedy of sorts.”

Born Alisa Rosenbaum in Russia in 1905, Rand emigrated to the United States in 1926 and thoroughly reinvented herself in real life far more successfully than Jay Gatsby ever managed to do in fiction. Moving to Hollywood to be in the film industry, she met legendary director Cecil B. DeMille and, despite her heavily accented English, talked her way into a job reading scripts for him. On a movie set, Rand met the man who would become her husband, an unambitious bit player named Frank O’Connor who nonetheless became the model for her relentlessly proactive, sexually rapacious heroes. By 1935, her play The Night of January 16th, a courtroom drama in which the audience voted on the verdict for an accused murderer each night, was a minor hit on Broadway. She soon published two novels, We the Living (a grim account of life in the Soviet Union) and Anthem (which portrays a future in which collectivization has effectively wiped out the individual). Then, in 1943, she struck it rich with The Fountainhead, a best-selling potboiler-cum-novel-of-ideas in which the hero, architect Howard Roark, blows up a housing project rather than see his original design compromised.

In 1950, Rand met Nathan Blumenthal, a UCLA undergrad 25 years her junior who would later change his name to Nathaniel Branden, honoring Rand by incorporating her surname into his new one, and become her designated “intellectual heir,” business partner, and secret lover. During the 1950s, Rand struggled with the writing of Atlas Shrugged and the creation, with Branden’s help, of a unified philosophical system that conceived of “man as a heroic being, with his own happiness as the moral purpose of his life, with productive achievement as his noblest activity, and reason as his only absolute.” Relocated in New York, Rand and Branden announced to their spouses that their love affair proceeded not from low passions but from high principle. “If we mean the values we profess,” Rand explained, “how can [Nathan and I] not be in love?” While publicly advocating living a transparent life with no regrets, Rand insisted that the arrangement be kept secret from even the couples’ closest friends and associates.

The affair, which continued sporadically over the next decade, eventually led to an acrimonious split among the participants. Betrayed by her emotions when Branden finally rejected her, the arch-rationalist Rand slapped him and spat on him, reportedly exclaiming, “If you have an ounce of morality left in you, an ounce of psychological health, you’ll be impotent for the next 20 years.” The Brandens divorced and Nathaniel moved back to California, where he became a leading figure in the self-actualization movement. O’Connor slid into quiet alcoholism and stayed married to Rand until his death in 1979.

By the time she died, at age 77 in 1982, Rand had delineated what she and her followers insisted was the most significant new philosophy since Aristotle (“objectivism,” which emphasized rationality as the defining characteristic of humanity) and was hailed as the godmother of small-government, pro-freedom libertarians (whom she dismissed as “hippies of the right”). A self-declared “radical for capitalism” who praised the “virtue of selfishness” and exulted the individual above any group, Rand continues to excite the reading public, moving upward of half a million volumes of her fiction and essay collections a year.

Indeed, since the publication of The Fountainhead Rand has been a bona fide cultural touchstone whose long shelf life appears to have no expiration date, especially in a time of economic crisis and resurgence of the Big Government she inveighed against. Earlier this year, for instance, late-night TV host Jimmy Fallon did a bit in which audience members ate pages of Rand’s free market–friendly books for sustenance as the stock market tanked. Regular (though ever-changing) reports in Variety insist that true-believing “Randroids” Brad Pitt and Angelina Jolie—or is it Charlize Theron now?—are very, very close to rolling film on an A-list version of Atlas Shrugged written by the screenwriter of Braveheart. Entrepreneurs ranging from Playboy founder Hugh Hefner to BB&T chief John Allison have pledged allegiance to Rand’s archly individualistic philosophy that declares, “I am a man who does not exist for others.” One member of Congress, Rep. John Campbell (R-Calif.), gives his interns Atlas Shrugged as a parting gift.

Since the TARP bailout last fall and the prospect of significant increases in taxes and regulation under President Barack Obama, the blogosphere has been abuzz with chatter about “Going Galt,” or pulling out of everyday economic life and retreating to a secret, laissez-faire lair, just like the unapologetic capitalist heroes of Atlas Shrugged who go on “strike” rather than submit to confiscatory taxes and a state takeover of their companies.

Despite—or perhaps because of—such persistent mass appeal, critics have never been kind to Rand. Consider the universally negative reaction to Atlas Shrugged upon its publication in 1957. This 1,100-page, densely plotted tale, packed in equal measure with descriptions of rough sex and paeans to capitalist innovation, climaxes in a Castro-length radio address in which the protagonist, John Galt, lauds “the man at the top of the intellectual pyramid [who] contributes the most to all those below” and attacks “the man at the bottom who, left to himself, would starve in his hopeless ineptitude.”

There’s a strong case that Whittaker Chambers’s notorious takedown of the novel remains the definitive poison-pen review; it makes Mark Twain’s legendary “Fenimore Cooper’s Literary Offenses” read like a love letter. Even though he shared Rand’s deep-seated contempt for the Soviet Union and willingness to testify before the House Committee on Un-American Activities about communist subversion of the United States, Chambers dismissed the novel in National Review not simply as “excruciatingly awful” and “remarkably silly” but as a crypto-Nazi tale of rule by a terrifying “technocratic elite” that would do away with lower life forms. “From almost any page of Atlas Shrugged,” Chambers wrote, “a voice can be heard, from painful necessity, commanding: ‘To a gas chamber—go!’ ”

Chambers was hardly alone in his outraged rejection of Atlas Shrugged’s vision of a world in which “looters” and “moochers” stole from the productive class. The New York Times similarly panned the work, calling it a book “written out of hate.” (Future Federal Reserve chairman Alan Greenspan, then a member of Rand’s inner circle, wrote a protest letter to the paper of record, declaring Rand’s righteousness in depicting “parasites who persistently avoid either purpose or reason [and thus] perish as they should.”)

Contempt has long been the standard literati response to Rand. Like Jack Kerouac, Rand is typically written off as a writer whose basic appeal is to maladjusted adolescents, a sort of vaguely embarrassing starter author who is quickly outgrown by those of us who develop more sophisticated aesthetic and ideological tastes. There’s more than a small degree of truth to such a characterization, but the extreme prejudice with which Rand is dismissed belies a body of work that continues to reach new audiences.

Given that critical context and the recession-driven boomlet in Randian thought, Ayn Rand and the World She Made and Goddess of the Market are not simply well-timed explorations of an enduring writer. They are essential guides to contemporary American politics and culture. A journalist with a strong background in financial reporting, Heller is excellent at capturing the loneliness at the center of Rand’s (and indeed, any writer’s) life. Using original research from Russia, Heller draws a critical but sympathetic thread through Rand’s biography, arguing that Rand’s insistence on individualism was heavily informed by the anti-Semitism her family faced in pre- and post-revolutionary Russia. Rand considered racism of any kind to be the basest form of collectivism. Heller also has a great eye for the contradictions and hypocrisy that ultimately make her subject more approachable. For instance, Rand fueled her endless writing sessions not with rational determination but with amphetamines and by sticking herself with a needle to maintain “focus,” a tacit admission that even her mind had its limits. Rand and her acolytes were masters of revising history so that the grand dame was seemingly a timeless genius who had no real influences or predecessors (except for Aristotle, of all people). Heller’s account of the figures who helped Rand develop her thought—especially Isabel Paterson, a New York Herald Tribune book reviewer and author with whom Rand predictably broke—helps recover an entire intellectual tradition that has mostly been forgotten.

Burns, a political scientist at the University of Virginia, makes the most of her unique access to Rand’s personal papers at the Ayn Rand Institute in Irvine, California. Like Heller, she situates Rand in a rich intellectual and cultural tradition that predated the New Deal and eventually gave rise to a revitalized limited-government movement that culminated in figures such as Ronald Reagan and Margaret Thatcher. Burns is particularly sharp at analyzing how Cold War conservatives such as Buckley rejected Rand’s rationalism but eventually benefited from her popularity with college students during the 1960s. Since the demise of their common foe, the Soviet Union, conservatives and libertarians increasingly find themselves at odds with one another over precisely the same issues that Rand and Buckley fought over decades ago. These range from questions about the proper role of religion in a secular society to whether the state should be used to restrict alternative lifestyles to the legitimate circumstances for military action.

Individually, Ayn Rand and the World She Made and Goddess of the Market help elucidate an underanalyzed cultural figure. Together, they provide a rounded portrait of a woman who, as Burns writes, “tried to nurture herself exclusively on ideas.” As Rand’s biography underscores, she failed miserably in that, even as she helped create an ideological framework that continues to energize debate in contemporary America.

Nick Gillespie is editor in chief of Reason.tv and Reason.com.

Reviewed: "Ayn Rand and the World She Made" by Anne C. Heller, Nan A. Talese/Doubleday, 2009.  "Goddess of the Market: Ayn Rand and the American Right" by Jennifer Burns, Oxford University Press, 2009.

Three Weddings and a War