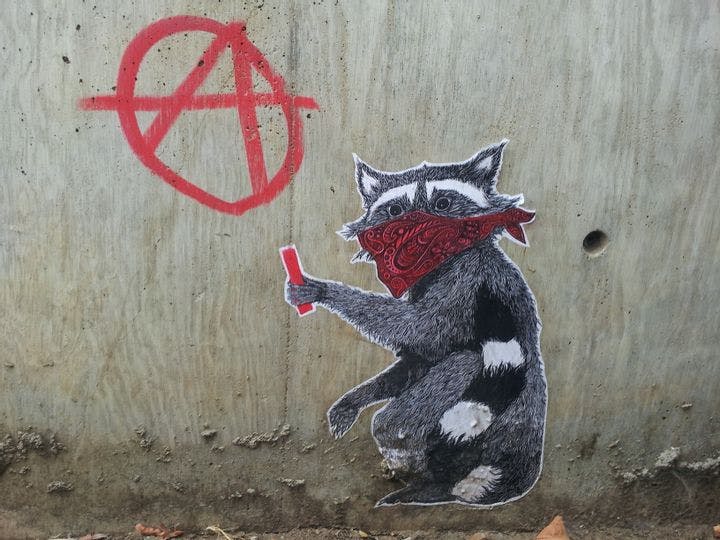 Looking at the world through an 'anarchist squint.'

For those of us who remember the 1970s as a time of lifestyle liberation and economic malaise, the word “anarchy” was nothing less than a punk cry of affirmation and an existential call to action. “I am an anti-Christ/I am an anarchist,” snarled Johnny Rotten of the Sex Pistols in 1976, in one of the great forced rhyme schemes of all time. Yet the band’s song “Anarchy in the U.K.” — and punk more generally — presaged not a collapse of British or American or even Western civilization, but a do-it-yourself revolution in cultural production and consumption that rejected top-down, centralized authority and hidebound tradition. Not coincidentally, economic decentralization took place too — President Jimmy Carter deregulated airline pricing and interstate trucking rates, British prime minister Margaret Thatcher loosened government controls on business, and even French president François Mitterrand, a Socialist, ultimately sold off state-owned industries. The Iron Curtain, rusted out for decades, finally collapsed by the early 1990s, literally incapable of keeping its repressive, soul-killing act together.

In Two Cheers for Anarchism, James C. Scott channels Proudhon more than punk while making a case for a kinder, gentler form of rebellion than the sort of bomb-throwing, street-fighting revolution typically associated with anarchism. Following Pierre-Joseph Proudhon, the 19th-century French theorist who asserted that “property is theft,” Scott defines anarchism loosely as “mutuality, or cooperation without hierarchy or state rule” (emphasis in the original). His rejection of “a comprehensive anarchist worldview and philosophy” is mirrored in the structure of the book, which consists of what he terms “fragments” rather than traditional chapters, the better to underscore the provisionality and narrow scope of his insights.

For Scott, anarchy is less a full-blown program than a tendency that privileges “politics, conflict, and debate” and shows a robust “tolerance for confusion and improvisation that accompanies social learning.” Most of all, it’s a rejection of rule by elites of any and all stripes, especially those who seek to remove themselves from scrutiny by claiming some sort of impersonal scientific basis for their rule.

Scott recognizes that total revolution often leads to something worse than what it replaces. “Virtually every major successful revolution ended by creating a state more powerful than the one it overthrew, a state that in turn was able to extract more resources from and exercise more control over the very populations it was designed to serve,” he writes. Two Cheers for Anarchism thus echoes themes from Scott’s previous books, including Seeing Like a State: How Certain Schemes to Improve the Human Condition Have Failed (1998). That work analyzed how disaster routinely results from grand plans to remake society according to some leader or elite’s unified field theory of how the world should be. This book explores how the little people work around the grand plan imposed on them.

Scott uses what he engagingly calls his “anarchist squint” to find all sorts of generally unacknowledged mini-revolts happening around us. These range from the puny — stepping off sidewalks in defiance of “don’t walk” signs — to the profound. For instance, he describes an art project created by anarchists in West Germany shortly before it was reunified with its communist counterpart in 1990. The activists, Scott writes, hauled a papier-mâché statue called Monument to the Unknown Deserters of Both World Wars around cities in East Germany, creating an unauthorized display that inevitably raised the ire of local officials. The statue “bore the legend, ‘This is for the man who refused to kill his fellow man.’” Scott calls the statue “a magnificent anarchist gesture, this contrarian play on the well-nigh universal theme of the Unknown Soldier: the obscure, ‘every-infantryman’ who fell honorably in battle for his nation’s objectives.”

For Scott, such acts of “insubordination” are exemplary because they bring paradoxes in our everyday lives to the foreground and push us toward a new understanding of the typically latent cultural, political, and economic forces that actually structure our lives. Other examples of everyday anarchist rebellion include work slowdowns, the removal of traffic signs by some localities in the Netherlands, and the refusal of some K–12 students in Massachusetts, Michigan, and elsewhere to take achievement tests implemented in the wake of the No Child Left Behind Act of 2001. This is all fine as far as it goes, and I think very few readers with even a passing knowledge of history would argue with Scott’s large conclusion that “the great emancipatory gains for human freedom have not been the result of orderly, institutional procedures but of disorderly, unpredictable, spontaneous action cracking open the social order from below.”

Yet there’s a curious and palpable sense of datedness to much of Two Cheers for Anarchism. References to high-1960s theorists such as Jane Jacobs, Antonio Gramsci, and E.F. Schumacher abound as if their insights were brand-new. Reading Scott, one would think very little had changed since Schumacher’s Small Is Beautiful: Economics as if People Mattered burst on the scene in 1973. In a world that is increasingly artisanal when it comes to food production and preparation, culture, lifestyle, and everything else, Scott quotes Schumacher to denounce McDonalds for its “Fordist production.”

There’s nothing wrong with Scott’s analysis of Robert McNamara and Vietnam-era body counts — “an infernal audit system that … blocked a wider-ranging dialogue about what might … represent progress.” But Scott seems to be fighting not even the last war but one several wars removed. He seems less interested in looking at the role of elites in the private and public sectors in precipitating the housing crisis of a few years ago than in settling a score with Enron and “market fundamentalists.” In a book that seeks to celebrate participatory culture, little is said about the rise of the personal computer and the Internet — and the vast decentralization of knowledge, expression, and power they have helped bring about.

Scott rightly castigates the nation’s K–12 public school system as “a ‘one-product’ factory” and laments the centralization of curricula and expectations. But in an American context, school, at least since it was made mandatory in the 19th century, has always been a crucible of conformity. (Go ask Mark Twain and Laura Ingalls Wilder.) What is actually new and “insubordinate” in a way that Scott should appreciate is the rise over the past several decades of a robust school choice movement that cuts across existing partisan political lines, racial and economic divides, and even long-standing distinctions between public and private education.

While around 90 percent of K–12 students still attend conventional public schools, each year an increasing number of children at all levels of learning and income are attending schools more tailored to their and their parents’ desires. (An increasing number of kids are also being homeschooled, arguably a more profound disruption of the norm.) There are more than 5,000 charter schools — publicly funded institutions with voluntary attendance and individualized curricula — serving more than two million kids in the United States. In 1991, there wasn’t a single one. Charters encompass a wide range of methods and educational programs — some follow “great books” curricula and others teach Afrocentrism or emphasize work-study. While their student outcomes vary, they represent the sort of decentralized experimentation Scott champions.

None of this is meant to suggest that contemporary America — or the wider world — is at some utopian tipping point toward self-actualization. But Scott’s well-meaning Two Cheers is too limited in its survey. According to Wikipedia, which describes itself as “the free encyclopedia anyone can edit” — talk about anarchy — Scott, 76 years old, is a chaired professor at Yale in political science and anthropology, and director of the Agrarian Studies Program there. In other words, he is not simply a member of an everyday elite, but of a super-elite. As such, and despite his best intentions, he must find it difficult to see past the privilege and sense of entitlement that surely still surround him in New Haven. But if he could, he would realize that more people than he recognizes are not only viewing the world through an “anarchist squint,” but actually getting on with the important project of living their lives the way they want to.

Nick Gillespie is editor in chief of Reason.com and a coauthor of The Declaration of Independents: How Libertarian Politics Can Fix What’s Wrong With America (2011).

Just because they're guerillas doesn't mean they're primitive.