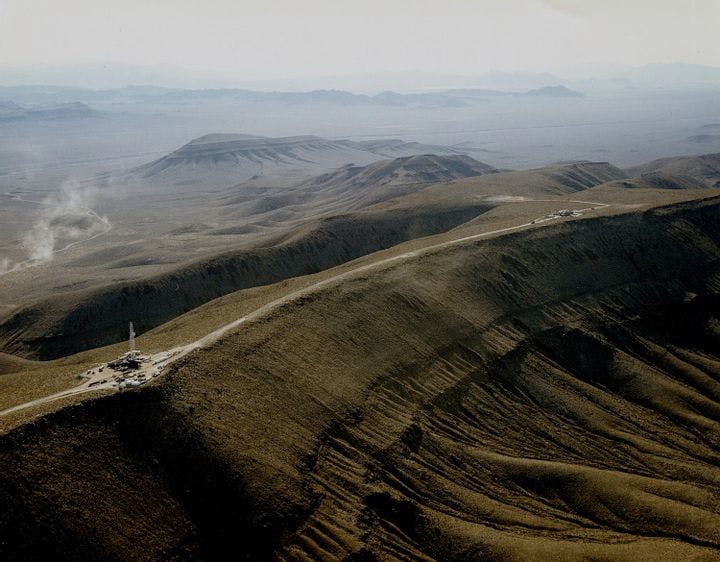 Human beings have a knack for engineering destructive activity and then obsessing over ways to either save ourselves, or mask that activity's catastrophic consequences.

Near the beginning of About a Mountain, John D’Agata reflects on the human search for meaning, “the dream that if we linger long enough with anything, the truth of its significance is bound to be revealed.” Pursuing that truth is the aim of every ambitious writer, and for D’Agata—an experimental essayist who teaches creative writing at the University of Iowa—significance lies also in the pursuit itself.

In the summer of 2002, after helping his mother move to Las Vegas, he ended up lingering to investigate two local occurrences. One was the Senate approval of Yucca Mountain—90 miles north of Las Vegas—as the storage site for America’s 77,000 tons of nuclear waste. The other was the death of a 16- year- old boy named Levi Presley, who on a hot July day jumped off the Stratosphere Hotel and Casino, the “tallest American building west of the Mississippi.”

How these two events merge provides About a Mountain with an elegantly digressive structure and, surprisingly, some sustained dramatic suspense. D’Agata titles his chapters after the six basic questions of reporting (Who, What, When, Where, Why, and How), but this is strictly a framework for his literary bricolage of memoir, reportage, conjecture, and philosophical meditation. As we follow his investigations, we also hop aboard his dizzying exploration of everything from linguistics to ancient history, to Edvard Munch’s painting The Scream, to Vegas politics, even casino signs. Rather than blur the book’s central concerns, these erudite flights of curiosity help bring them into focus.

One of those concerns is our human pattern of engineering destructive activity and then obsessing over ways to either save ourselves or mask that activity’s catastrophic consequences. Consider Las Vegas itself: a desert city so overreaching in its ambition and growth that Lake Mead—the largest artificial body of water in the world, built to sustain the city—has a 50 percent chance of drying up within the next dozen years.

Then consider Yucca Mountain, long touted by scientists and politicians as a “safe, and cool, and dry” repository for the deleterious fruit of our nuclear age. When 63,000 gallons of water were poured over the mountain to test how many years it would take for moisture to reach the repository, all 63,000 gallons reached it in less than three months. In the book’s most compelling section, D’Agata describes the Department of Energy’s theatrically absurd project to create a sign outside Yucca to warn off humans 10,000 years hence. If most contemporary English-speakers cannot read the Old English of Beowulf, written a millennium ago, how will they read a sign in any language 10 millennia from now?

Yucca Mountain may not only fail to mask our destructive activity; it also seems destined to exacerbate it. Apparently, the Obama administration agrees: Last year it cut funding for the project while it looks for yet another Yucca, a decision D’Agata notes skeptically in his appendix as a political move intended to appease wary voters.

Our relentless search for solutions to our self-created problems, D’Agata posits, has made us displace our grasp on reason and reality, on the problems (the questions) themselves. This is where his myriad investigations dovetail with suicide. D’Agata learns that Levi Presley was the fourth person since 2000 to jump off the Stratosphere, and that shiny Las Vegas has the country’s highest suicide rate, though he hunts fruitlessly for someone in town to explain why. His investigation into the circumstances surrounding Levi’s death is similarly stymied, yielding only arbitrary details of the boy’s life (his affinity for Applebee’s restaurants, purple-tinted glasses, a girl named Mary, etc.). So, eschewing psycho analysis, D’Agata reconstructs Levi’s journey through the Stratosphere’s carnival of games and wares and advertisements, up its 1,149-foot tower, and to his death, in the book’s most profound statement on the absurdity of how we as humans invent, communicate, and self- destruct.

About a Mountain is ultimately about that absurdity: the unreasonableness of reason. Yucca Mountain may be the most thoroughly studied parcel of land in the world, but its endless unknowns reveal “only the fragility of our capacity to know.” The one certain truth is that we interpret the elusive universe at our own risk, that meaning—however one may confront or pursue it—is inevitably fluid, conditional, and ambiguous.

Vu Tran teaches literature and creative writing at the University of Nevada, Las Vegas. His first novel, This or Any Desert, is forthcoming.